Blackfish, a film about orcas in captivity, has stirred up a recurrent debate about using animals for entertainment. This tiny fraction of animals who suffer under human care in the service of entertainment is much more controversial than other animal uses that cause greater harm in aggregate. This could be for a variety of reasons, and here I’ll reference Haidt’s Moral Foundations Theory, a framework for understanding moral reasoning. The harm/benefit calculation of animal suffering may not add up when the ends are as obviously unnecessary as entertainment. Liberals, those most concerned with animal welfare, tend to be more focused on harm/care but can also be concerned with purity (aka sanctity/degradation) in the form of what is “natural”. Eating meat is considered natural but using animals for entertainment (or shooting them for sport) is much more maligned. Moreover, animals used in entertainment are, almost by definition, charismatic and anthropomorphized, a recipe for identifying with those who are unfairly treated. Is this moral outrage the beginning of consciousness raising about animal treatment more generally?

In “The Better Angels of Our Nature”, Steven Pinker impressively maps out all the ways that violence is decreasing in our world. However, as I pointed out in a radio episode about this book and its implications for animals, I fundamentally disagree with his idea that violence towards animals is decreasing as well as what he sees as the major barriers to an animal rights revolution (e.g. where to draw the line of sentience, “meat hunger”). Moreover, as I pointed to in a previous blog, I am skeptical that pushing for improvements in animal welfare will have significant impact on actual animal welfare for a variety of reasons (e.g. evolved ethical blind spots toward animal suffering).

One of Pinker’s central arguments is that a reduction in animal harm in films is indicative of this trend toward a reduction in violence towards animals. At the time, I made the argument that, because of more nonviolent social norms, people have become less tolerant of visible animal harm (as in films) and their reputation regarding harming animals (e.g. distaste for hunting, better treatment of pets, support for stricter laws concerning animal treatment). Unfortunately, humane use of animals in films is a case study in superficial regulation that does a better job of assuaging the guilt of consumers and polishing the reputation of producers than actually preventing animal harm. 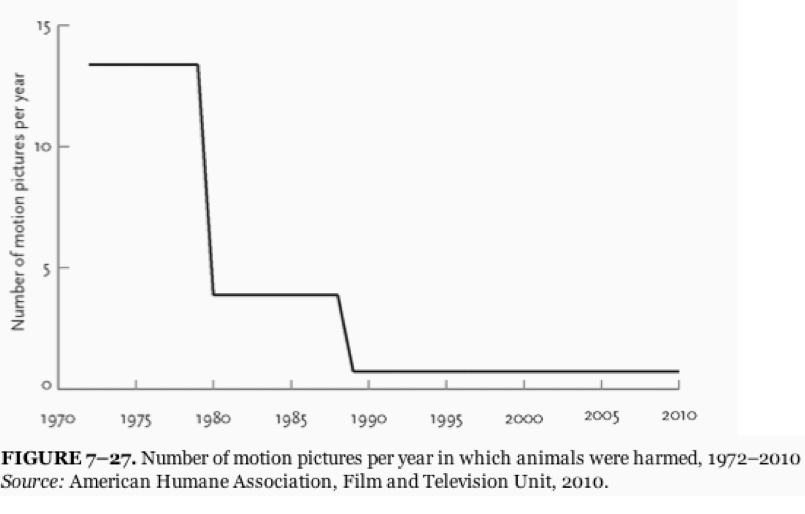 The American Humane Association’s rules regarding animal handling involve seemingly strict wording (e.g. “Rubber mats or other non-slip material or surface shall be provided when simulating rain”). However, a recent exposé in “the Hollywood reporter” shows that the “no animals were harmed” certification is nearly meaningless. The AHA has awarded this credit to “films and TV shows on which animals were injured during production. It justifies this on the grounds that the animals weren’t intentionally harmed or the incidents occurred when the cameras weren’t rolling”.

The piece outlines a slew of incidents and allegations including deaths by drowning, dehydration and impalement. In my view these pale in comparison to what happens in one hour of farming animals for food in the USA. Don’t get me wrong, I think harming animals for entertainment is unacceptable but consider in strictly utilitarian terms the pleasure to harm ratio when animals are used in films. During filming for “Life of Pi” a tiger “nearly drowned” but apparently was able to clamber up to safety and resume working. Divide this tiger’s anxiety by the tens of millions of people who enjoyed watching the film for at least an hour and you get a much better result than the months of pain to minutes of pleasure involved in eating one broiler chicken. Moral outrage is better predicted by the social visibility than the degree of harm.

If a regulatory body meant to monitor hundreds of thousands of animals is promoting the illusion over the reality of animal welfare what hope for the billions of animals farmed for food? In my view, the atrocities uncovered in animal use are only limited by the number of people with helpful motives willing to go undercover to reveal them. Pinker would not tell us whether or not he engaged in any consumer practices to avoid harming animals  but a colleague tells me at a recent dinner he ordered lamb. Perhaps he subscribes to a logic of the larder type of argument. Certainly in his book he seems to endorse support for improvements in regulation to ease the suffering of animals over vegetarianism. I wouldn’t bring up any one of the billions of people eating meat except that Pinker is very influential and could probably reduce more animal suffering by promoting the boycott of at least the most death intensive products (that is, eggs, chicken and fish) better than any animal standards in films could.

Perhaps animal standards in film of the future are really going to move forward, hold producers responsible and vindicate Pinker’s argument. There is a new player to challenge the AHA’s monopoly. “Movie Animals Protected” promises to offer a more transparent and accountable certification for animals involved in entertainment and is going to be headed up by a woman who was allegedly wrongfully terminated for questioning animal deaths on set. For my part, I hope that this interest in animal suffering in one domain leads to greater awareness of animal harm in domains in which the individual consumer has more control. In polls, the majority of Brits and Americans agree that there should be stricter regulations regarding animal welfare however I have yet to see good evidence that these welfare improvements are outpacing the inevitable suffering of raising a greater number of animals for food per year. In my view, a skeptical and evidence-based approach to effectively reduce the suffering of animals would endorse changing one’s purchasing behavior (and donating to organizations who change the purchasing behaviors of others) over merely identifying with a popular attitude.